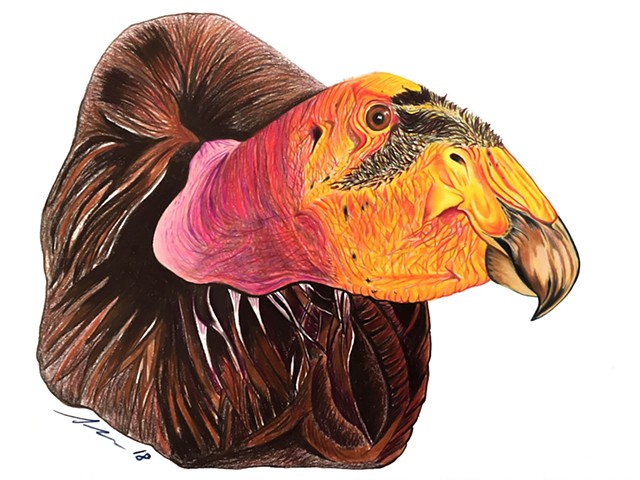 My goal of this artwork is to bring out the soul and spirit of each bird and animal I create.

This artwork was created using colored pencils on a high grade vellum paper.

The California Condor (Gymnogyps californianus); one of the most iconic scavenger birds in North America!

I have been lucky enough to have seen these birds in the wild, in CA and UT, on a few occasions and the are just spectacular! With a wingspan of 9-10 feet, they are unmistakable for any other species.

Most biologists would agree that this is THE MOST SUCCESSFUL endangered species recovery program, since the inception of the Endangered Species Act, in 1973.

On the brink of extinction, primarily from lead poisoning by the 1980's, US Fish and Wildlife decided to start a captive breeding and recovery program. The reintroduction of captive bred condors into the wild, began in 1992. From only a few individuals to over 400 today.

Currently, condors can be seen, in the wild, in CA, UT, AZ and NV.

For more information on this fascinating species, see these links: